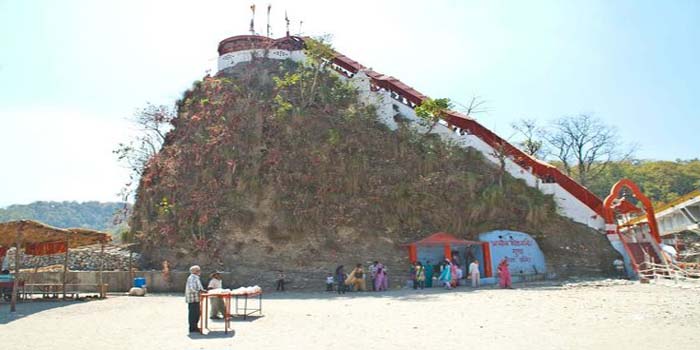 The Garijiya Temple, one of the most popular tourist destinations close to the Jim Corbett National Park is visited by several tourists, as well as, pilgrims every year. It is a holy shrine, buit on top of a large rock which emerges from the Kosi river. Located in the Garijiya village near Ramnagar, the this temple worships the deity Garijiya Devi; the daughter of Himalaya. This sacred Shakti shrine is visited by numerous devotees from all over the country.

This holy site also houses several other shrines such as those of Lord Shiva, Goddess Saraswati, Lord Ganesha, and Baba Bhairon. Legend has it that the rock where the temple has been built came down when River Kosi got flooded.

In order to reach the temple, tourists will have to cross a bridge that will take them to the island. There is a steep stairway that consists of 70 staircases, leading to the main temple. You can even use another stretch of stairs from the temple that will take you straight into the Kosi River.

The deity is very charming in appearance. Visitors and pilgrims visit this temple mostly during Karthik Poornima to witness the elaborate prayers that take place here each year. One trend that is quite popular in the temple is to tie a thread near the deity. Whoever does this, it is believed, will have any wish that he makes come true. This is one belief that attracts several visitors here every year.

It is best that you avoid the temple visit in monsoons as the river is prone to flooding. Also the location of the temple in the middle of the national park makes it unsafe to visit after sun set. The timings of visiting the temple are between 6:00 AM to 12:00 noon and from 4PM- 8 PM depending upon the time of sunset.

The special packages will arrange for your transport to the temple. You can opt to visit the temple as part of a safari or even separately as you find convenient.